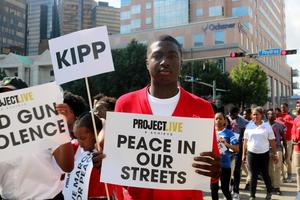 Scholars from KIPP Booker T. Washington and KIPP Renaissance joined other students across the city for peace march and rally
Scholars from KIPP Renaissance High School and KIPP Booker T. Washington High School joined hundreds of other students across the city September 20 as they marched from the Superdome to City Hall, demanding an end to gun violence.
The March and Rally for Peace was organized by students at Inspire NOLA and Project Live and Achieve in response to the loss 15-year-old Chance Smith and the gun violence that to plague the city of New Orleans.
View full gallery